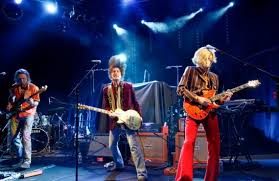 The Flower Kings are a Swedish progressive rock band formed in 1994 by guitarist and singer-songwriter Roine Stolt. The group began as Stolt’s touring band to support his third solo album The Flower King. They continued performing after the tour and have gone on to become one of the most prolific studio recording units in rock music of their era. In thirteen years they released nearly 18 hours of music spread over 11 albums. See for more.

I Am The Sun

Church of your heart

Love Is The Only Answer

The Truth Will Set You Free