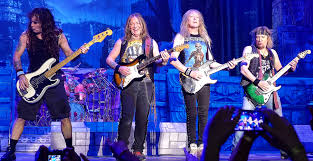 Iron Maiden ar an Inglish heavy metal band from Leyton in east Lunnon, formed in 1975 by bassist Steve Harris. Since their inception, the group have released a collective total of thirty-albums: fifteen studio albums; seven live albums; fower EPs; an five compilations. Pioneers o the New Wave o Breetish Hivy Metal, Iron Maiden achieved success during the early 1980s an, efter several lineup changes, the baund went on to release a series o platinum an gold albums. These include the US platinum-selling landmarks The Number of the Beast in 1982, Piece of Mind in 1983, Powerslave in 1984, the acclaimed live album Live After Death in 1985, Somewhere in Time in 1986, an Seventh Son of a Seventh Son in 1988. See for more.

Phantom Of The Opera

Rime of the Ancient Mariner

Ghost Of The Navigator

The Thin Line Between Love and Hate