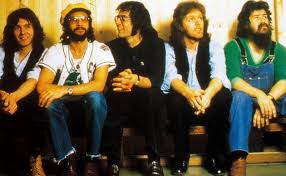 Manfred Mann’s Earth Band is an English rock band formed by South African musician Manfred Mann. Their hits include covers of Bruce Springsteen’s “For You”, “Blinded by the Light” and “Spirit in the Night”. After forming in 1971 and despite a short hiatus in the late 1980s/early 1990s, the Earth Band continues to perform and tour. Keyboardist Manfred Mann started in the 1960s with the self-titled band that had such hits as “Do Wah Diddy Diddy” and Bob Dylan’s “The Mighty Quinn” and then moved on to jazz fusion-inspired Manfred Mann Chapter Three before forming the Earth Band in 1971. See for more.

Singing the dolphin through

Blinded by the Light

Father of day father of night

davy’s on the road again

Spirit’s In The Night

Angels At My Gate

Dancing In The Dark