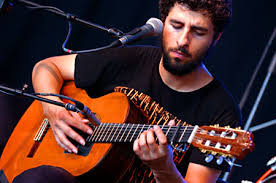 José Gabriel González (born 31 July 1978) is a Swedish indie folk singer-songwriter and guitarist from Gothenburg, Sweden. González is also a member of the Swedish band Junip, along with Tobias Winterkorn. In 1976 the González family, of academic psychologist father, mother, and older sister, then an infant, fled Argentina, after an ultra-conservative military junta seized power in March 1976, the beginning of the “Dirty War”. Jose was born two years later, 1978, in a suburb of Gothenburg, Sweden. See for more.

‘Step Out’ The Secret Life Of Walter Mitty

Stay in the Shade