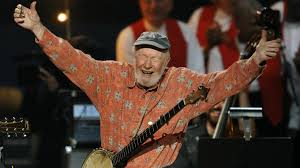 Peter “Pete” Seeger (May 3, 1919 – January 27, 2014) was an American folk singer. A fixture on nationwide radio in the 1940s, he also had a string of hit records during the early 1950s as a member of the Weavers, most notably their recording of Lead Belly’s “Goodnight, Irene”, which topped the charts for 13 weeks in 1950. Members of the Weavers were blacklisted during the McCarthy Era. In the 1960s, he re-emerged on the public scene as a prominent singer of protest music in support of international disarmament, civil rights, counterculture and environmental causes.  See for more.

Where Have All The Flowers Gone

Interview: Talking About Climate Change in 2007

This Land is Your Land – Obama Inauguration

Turn Turn Turn , If I Had A Hammer, We Shall Overcome