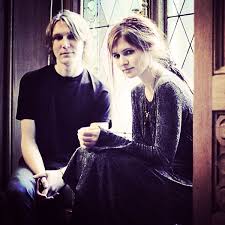 iamthemorning is a Russian progressive rock/chamber pop duo formed in 2010, consisting of singer Marjana Semkina and pianist Gleb Kolyadin. The duo formed at the start of the 2010. Their name was taken from the song “I Am the Morning” from Oceansize’s debut release, Effloresce. The band self-released their debut album, in April 2012. The second studio album, Belighted, was released by Kscope in September 2014. Recorded and mixed in London by Marcel van Limbeek (Tori Amos), the album features drummer Gavin Harrison from Porcupine Tree. See for more.

Song of Psyche (from The Bell)

To Human Misery (from Belighted)

The Simple Story (from Belighted)