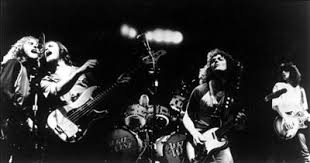 Argent was an English rock band founded in 1969 by keyboardist Rod Argent, formerly of The Zombies. They were best known for their 1972 song “Hold Your Head Up”. Original members of the band were Rod Argent, bassist Jim Rodford (Argent’s cousin and formerly with the Mike Cotton Sound), drummer Bob Henrit and guitarist/keyboardist Russ Ballard (both formerly with The Roulettes and Unit 4 + 2). Lead vocal duties were shared between Ballard, Rodford and Argent. The first three demos from Argent, recorded in the autumn of 1968 featured Mac MacLeod on bass guitar, though he would not become a member of the group. Rod Argent, Chris White (former Zombies bassist, producer, songwriter) and Russ Ballard were the group’s songwriters. See for more.

Hold Your Head Up

Be My Lover Be My Friend

Dance in the Smoke

I Am the Dance of Ages