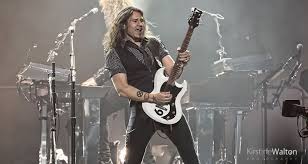 Theofilos Xenidis (born March 10, 1966), better known as Phil X, is a Greek-Canadian musician and songwriter. Since 2013 he has played lead guitar with Bon Jovi and officially replaced former lead guitarist Richie Sambora in 2016. In 1982, Phil formed the hard rock/heavy metal band Sidinex (naming it after himself, the moniker being his last name spelled backwards) with singer Todd Farhood, bassist Kevin Gingrinch and drummer Scott Masterson. The band released only one EP in 1985, Forever Young, before changing name to Flip City in 1987 and disbanding soon after. See for more.

The Knack’s My Sharona