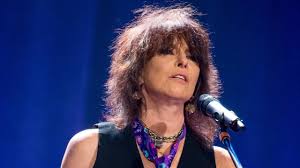 Christine Ellen “Chrissie” Hynde (born September 7, 1951) is an American musician who is best known as a founding member of the rock band The Pretenders. Inspired by hippie counter-culture, Hynde worked in London with Malcolm McLaren and Vivienne Westwood at their punk-themed clothing store, SEX. In 1978, she formed her own band, The Pretenders, with Pete Farndon, James Honeyman-Scott and Martin Chambers. As singer, songwriter and guitarist, she has been the only constant member of the band throughout its history. She has also released a number of hits with other musicians including Frank Sinatra and UB40. Hynde and The Pretenders were inducted into the Rock and Roll Hall of Fame in 2005. See for more.

Back On The Chain Gang

I Got You Babe

Cher Love Can Build a Bridge
\

The Joker, Everything I Own