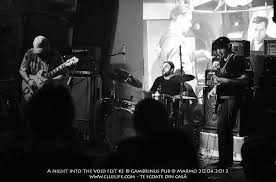 The :Egocentrics are a Romanian psychedelic band from Timiºoara, consisting of guitarist Brenn, bassist Jess and drummer Hera. Very little is known about this band as they prefer to keep a low profile information-wise and speak through enigmatic but powerful concert performances and, as of recent, recorded material.  The band came to international attention when still playing only local venues, as a consequence of releasing the debut EP “Mystic Initiation” in 2008. The EP was self-financed and recorded in a local studio with the band members exercising their production talents for the first time but, contrary to how that might sound, the material received positive reviews on Cosmic Lava or The Ripple Effect. See for more.

Bright Dawn of the Soul