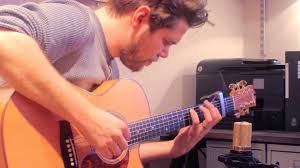 Emil was born in 1987 in Bengtsfors, Sweden. He started playing the guitar at the young age of 9. His teacher at the Music school in Bengtsfors was a great inspiration and he gave him his first opportunity to play for a live audience. Emil’s first guitar was a nylon string acoustic. Then for Christmas he received an electric guitar which started his discovery into the world of blues, funk and rock guitar. While attending a music program (gymnasium, estetiska programmet) in Åmål, his interest in playing guitar grew even stronger. During this time Emil played in several bands and took part in many different projects. See for more.

The Rose & Bridge Over Troubled Water

The house of the rising sun

You Are My Sunshine

What a Wonderful World

Have Yourself A Merry Little Christmas