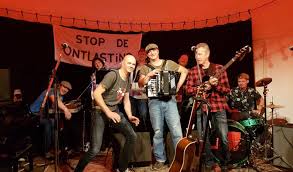 RK Veulpoepers BV was a Dutch anarchist folk band that was founded in 1976 in Hilvarenbeek. The company specialized in cheerful folk music with Dutch-language, socially committed texts, and aimed, among other things, against the ethical revival of the CDA, the choice of music from Hilversum 3, Shell and nuclear weapons. In addition, against Rabobank and the beer manufacturer Stella Artois.Behalve at parties and regular concerts, the band was regularly present at promotional meetings. In 1979 the band became nationally known with the song Den Egelantier, which despite the good sales was not a hit because the band refused to playbacken for promotion in all kinds of television programs. See for more.