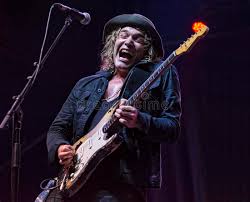 Philip Sayce is a Welsh born guitarist, singer and songwriter from Canada. Sayce was born in Aberystwyth, but family moved to Canada when he was two years old, and he grew up in Toronto. His parents, Kenneth and Sheila, listened to music by Eric Clapton, Ry Cooder and Dire Straits, among many other artists. His parents’ love of music inspired his love for the guitar, and  he also played the piano and trombone for over 10 years. He was fifteen years old when he played in his first band. Sayce and his best friend, drummer Cassius Pereira, played in bands together throughout high school, holding band practice  in their basements. Sayce’s style is strongly influenced by Jimi Hendrix and Stevie Ray  Vaughan, whose untimely death in August 1990 greatly affected the young guitarist. See for more.

Aberystwyth – Live at The Mint

blood on your hands

Slow Blues “As the Years Go Passing by

As the Years Go Passing By