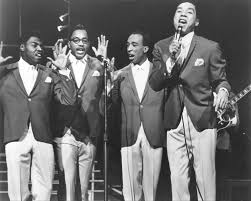 The Miracles (also known as Smokey Robinson and the Miracles from 1965 to 1972) were an American rhythm and blues vocal group that was the first successful recording act for Berry Gordy’s Motown Records, and one of the most important and influential groups in pop, rock and roll, and R&B music history. Formed in 1955 by Smokey Robinson, Warren “Pete” Moore, and Ronnie White, the group started off as the Five Chimes, changing their name to the Matadors two years later. The group then settled on the Miracles after the inclusion of Claudette Robinson in 1958. The most notable Miracles line-up included the Robinsons, Moore, White, Bobby Rogers and Marv Tarplin. See for more.

The Tracks Of My Tears

the love i saw in you was just a mirage

santa claus is coming to town

Swept for you baby