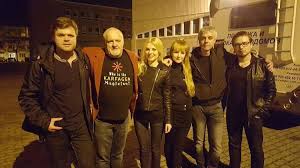 KARFAGEN (meaning Carthago) is a symbol of glory and wisdom, a never-ending journey into the world of the forgotten past and unpredictable future. KARFAGEN is the brainchild of multi-talented musician and composer, Antony Kalugin. The name was first used in 1997, when Antony formed a band at school. While he was studying at the architectural university a year later, he began to record the first Karfagen compositions in one of the local studios, and a few tracks from this period can be found on the `Key to Perception’ compilation from 2009. See for more.

My Bed Is a Boat