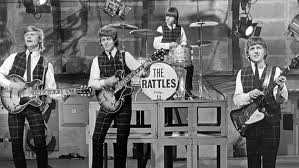 The Rattles are a German rock band, formed in Hamburg in 1960, most prominently known for their 1970 psychedelic hit single, “The Witch”. The Rattles performed in Hamburg, and played at the same venues as The Beatles on several occasions in 1962. In 1964 the group recorded “Zip-A-Dee-Doo-Dah”, which charted in the UK. In 1968 they recorded their first version of “The Witch”, with vocals by Henner Hoier. The band’s records sold well in Germany during the 1960s. See for more.

I Drove All Night

Come On And Sing