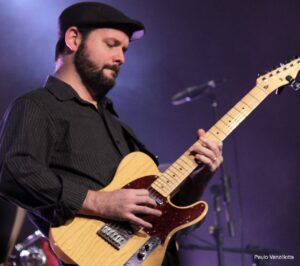 Mauro Filler is a Brazilian guitarist, from Rio de Janeiro. He has been a professional guitarist for over 20 years and has taken part in projects that range from blues to heavy metal. He has been mainly involved in the blues rock segment playing alongside many artists from the Brazilian scene on the main stages and events of the country, such as Rio das Ostras Jazz & Blues Festival, Teatro Rival Petrobrás and Mississippi Delta Blues Festival. His main influences are guitarists such as Jimi Hendrix, Eric Clapton, Gary Moore, Adrian Smith and Warren Haynes. See for more.

Back on the Edge (Escape Project)

Story of the Blues