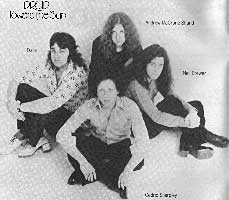 Druid were a 1970s progressive rock band from England, and initially came to public attention by winning a 1974 unsigned band contest by Melody Maker magazine. The band went on to perform on The Old Grey Whistle Test and to record two albums. Their sound was notably influenced by Yes. Former member Cedric Sharpley, who went on to back Gary Numan in the band Tubeway Army, died from a heart attack on 13 March 2012. Bass player Neil Brewer was the third presenter of the children’s TV show Rosie and Jim from 1997-2000. See for more.