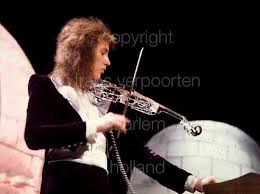 Edwin “Eddie” Jobson (born 28 April 1955) is an English keyboardist and violinist noted for his use of synthesizers. He has been a member of several progressive rock bands, including Curved Air, Roxy Music, U.K., and Jethro Tull. He was also part of Frank Zappa’s band in 1976-77. Aside from his keyboard work Jobson has also gained acclaim for his violin playing. See for more.

In The Dead of Night” (the full suite)