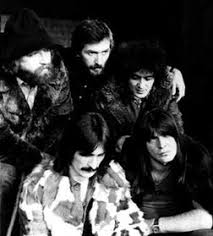 Smak (Serbian Cyrillic: Смак; trans. Endtime) is a Serbian and former Yugoslav rock band from Kragujevac. The group reached the peak of popularity in the 1970s when it was one of the most notable acts of the former Yugoslav rock scene. The band’s leader, guitarist Radomir Mihajlović, nicknamed “Točak” (“The Wheel”), is considered one of the most influential guitarists on the former Yugoslav rock scene. Formed in 1971 by the guitarist Radomir Mihajlović “Točak” and drummer Slobodan Stojanović “Kepa”, the band did not get a default lineup until 1975 by which time bassist Zoran Milanović, vocalist Boris Aranđelović and keyboard player Laza Ristovski consisted the official band membership. See for more.