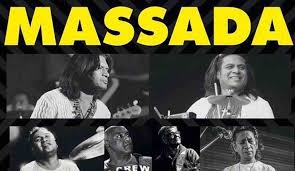 Massada is a Dutch-moluconist band from Huizen, the Netherlands. The band scored in the years 70 and 80 of the 20th century hits like Latin Dance, Arumbai and Sajang E. Their performances are still successful. The band started in the years 60 as The Eagles and played mainly on Moluccan festivals. When the American Eagles hits in the Netherlands started to score, the group changed their name in 1973 in Massada (a citadel in Israel). On February 26, 1975, a day before the 29th anniversary of percussionist Nippy Noya, Massada won a group match of music newspaper OOR; However, a record contract was rejected because artistic freedom could not be guaranteed. See for more.

Trust in me unplugged at Muma theatre