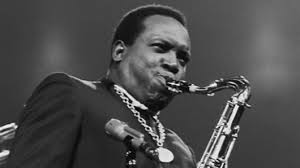 Curtis Ousley (February 7, 1934 – August 13, 1971), who performed under the stage name King Curtis, was an American saxophone virtuoso known for rhythm and blues, rock and roll, soul, blues, funk and soul jazz. He was adopted with his sister, Josephine Ousley Allen. The two grew up in Texas. Variously a bandleader, band member, and session musician, he was also a musical director and record producer. Adept at tenor, alto, and soprano saxophone, he was best known for his distinctive riffs and solos such as on “Yakety Yak”, which later became the inspiration for Boots Randolph’s “Yakety Sax” and his own “Memphis Soul Stew”.  See for more.

When A Man Loves A Woman.

In A Funky Groove