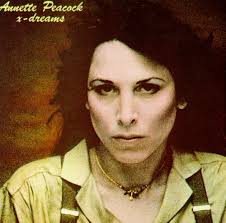 Annette Peacock (Born 1941) is an American composer, singer, songwriter, producer, arranger, and musician. She was a pioneer in the genres of rap and in electronic music, with her voice using the Moog synthesizer, and she’s the creator of the free-form song. Annette Peacock was born Brooklyn, New York and was writing music by the time she was five-years-old. She is self-taught except for some time spent at Juilliard in the 1970s. Her mother was a violist in the San Diego and Philadelphia Philharmonic Orchestras who studied at the Curtis Institute of Music. During the early 1960s, Peacock was an associate and guest of Timothy Leary and Richard Alpert (Ram Dass) at their mansion and psychedelic center in Millbrook, New York, and she was among the first ten students to study macrobiotics with Michio Kushi. See for more.