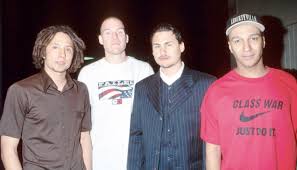 Rage Against the Machine (also known as RATM or just Rage) is an American rock band from Los Angeles, California. Formed in 1991, the group consists of rapper and vocalist Zack de la Rocha, bassist and backing vocalist Tim Commerford, guitarist Tom Morello, and drummer Brad Wilk. They draw inspiration from early heavy metal instrumentation, as well as hip hop acts such as Afrika Bambaataa, Public Enemy, the Beastie Boys, and Dutch crossover band Urban Dance Squad. Rage Against the Machine is well known for the members’ leftist and revolutionary political views, which are expressed in many of the band’s songs. As of 2010, they had sold over 16 million records worldwide. See for more.

Killing In the Name

Sleep Now in the Fire

Take The Power Back

Bullet in the Head

How I Could Just Kill a Man

The Ghost of Tom Joad