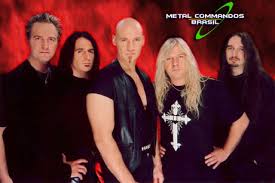 Primal Fear is a German power metal and speed metal band formed in 1997 by Ralf Scheepers (vocals, ex-Gamma Ray) and Mat Sinner (bass and vocals, Sinner). Sinner & Scheepers formed the band after Ralf was not hired as Rob Halford’s replacement in Judas Priest. Primal Fear was founded in October 1997 by singer Ralf Scheepers and Mat Sinner. Scheepers and Sinner have been constants in the heavy metal scene before the band was founded. Ralf Scheepers sang in the bands Tyran Pace, F.B.I. and the internationally successful band Gamma Ray. After a gig with his Judas Priest cover band Just Priest in which Mat Sinner and Tom Naumann helped out the idea arose to found Primal Fear. See for more.

Running In The Dust