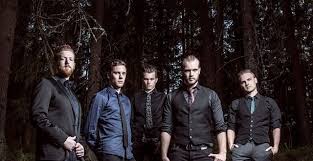 Leprous is a rock band from Notodden, Norway, formed in 2001. The group was founded by singer and keyboardist Einar Solberg and guitarist Tor Oddmund Suhrke. After releasing several demos with relatively unstable lineups, the band released their first studio album, Tall Poppy Syndrome, in 2009. They subsequently gained prominence as the live backing band of Ihsahn (who is Solberg’s brother-in-law), who, in turn, contributed on several Leprous records as guest singer or producer. Their acclaimed 2011 album Bilateral led to further attention. See for more.