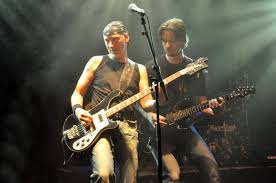 Knight Area is a Dutch progressive rock band which was formed in 2004 by brothers Joop and Gerben Klazinga. Knight Area originally started as a solo project of Gerben Klazinga. After the release of the debut album The Sun Also Rises in 2004 the decision was made to form a band. Musically, the band is a cross-over between retro-prog and neo-prog. After various gigs throughout Europe and NEARfest in the USA, the second album Under a new Sign was released in 2007. See for more.

Blood on the Risers

Afraid of the Dark