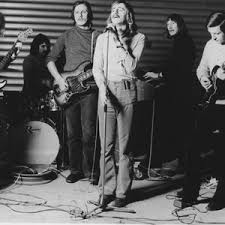 Rufus Zuphall is a German progressive rock band from Aachen, part of the krautrock scene of the 1970s. The band was founded in 1969 by Günter Krause (guitar, vocals), Helmut Lieblang (bass), Klaus Gülden (flute) and Udo Dahmen (drums). Their style used to blend prog rock, blues rock, hard rock and some folk-ish, often instrumental tunes. A special feature of this group is the use of the flute, which sometimes led to comparisons with the English band Jethro Tull. In 1970 they issued their first LP, “Weiß der Teufel… “, self-release with limited copies available, including an experimental title track which was over 17 minutes long. On the second album, “Phallbost” (1971) they counted with Dieter Dierks and his recording studios although, before their planned third LP was completed, the musicians decided to go separate ways in 1973, for musical and personal reasons. See for more.