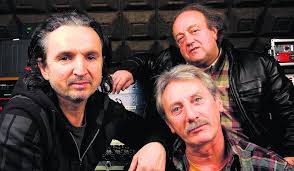 SBB (first known as Silesian Blues Band, later as Szukaj, Burz, Buduj – Polish for “Search, Break up, Build”) is a Polish progressive rock band formed following the 1968 Prague Spring and the 1970 riots, in 1971 in Siemianowice, Upper Silesia. It consisted of multi-instrumentalist and vocalist Józef Skrzek, a young guitar player Apostolis Anthimos, the drummer Jerzy Piotrowski and sound engineer Grzegorz Maniecki. It was one of the most popular super-groups in Poland and Europe in the 1970s. SBB was a popular opposite to the acronym of the SB (Służba Bezpieczeństwa) in Polish People’s Republic and its songs about freedom were known on both sides of the Iron Curtain. See for more.

Walkin’ Around The Stormy Bay