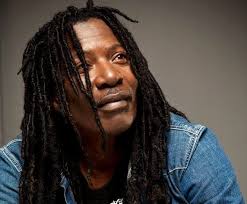 Alpha Blondy (born Seydou Koné; 1 January 1953 in Dimbokro,[1] Ivory Coast) is a reggae singer and international recording artist. Many of his songs are politically and socially motivated, and are mainly sung in his native language of Dioula, French and in English, though he occasionally uses other languages, for example, Arabic or Hebrew. First son of a family of eight children, Seydou Koné was raised by his grandmother, growing up in what he described as “among elders”, which later was to have a big impact on his career. In 1962, Alpha Blondy went to join his father in Odienné, where he spent ten years, attended Sainte Elisabeth High School, and was involved in the Ivory Coast students movement. See for more.