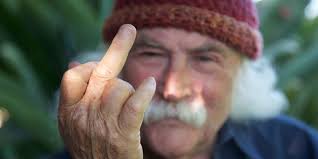 David Van Cortlandt Crosby (born August 14, 1941) is an American singer-songwriter and guitarist. In addition to his solo career, he was a founding member of both the Byrds and Crosby, Stills & Nash. He wrote or co-wrote “Lady Friend,” “Why,” and “Eight Miles High” with the Byrds and “Guinnevere,” “Wooden Ships,” “Shadow Captain,” and “In My Dreams” with Crosby, Stills & Nash. He wrote “Almost Cut My Hair” and the title track “Déjà Vu” for Crosby, Stills, Nash & Young’s 1970 album. He is known for his use of alternate guitar tunings and jazz influences. Crosby has been inducted into the Rock and Roll Hall of Fame twice: once for his work in the Byrds and once for his work with CSN. Five albums he contributed to are included in Rolling Stone‘s 500 Greatest Albums of All Time, three with the Byrds and two with CSN(Y). He has been depicted as emblematic of the 1960s’ counterculture. See for more.

She’s Got to Be Somewhere

Things We Do For Love

Behind The Scenes of Lighthouse

The dark side of David Crosby: the Drug Years – Wooden Ships, 1983