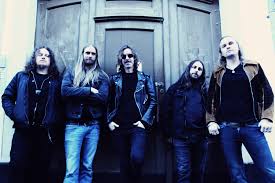 Opeth is a Swedish progressive metal band from Stockholm, formed in 1989. The group has been through several personnel changes, including the replacement of every single original member. Lead vocalist, guitarist and songwriter Mikael Åkerfeldt has remained Opeth’s primary driving force since the departure of original vocalist David Isberg in 1992. Opeth has consistently incorporated progressive, folk, blues, classical, and jazz influences into its usually lengthy compositions, as well as strong influences from death metal, especially in their early works. Many songs include acoustic guitar passages and strong dynamic shifts, as well as demonic vocal characterization. See for more.

In My Time Of Need

To Bid You Farewell