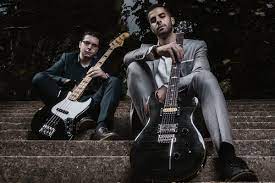 Dreaming Madmen is a Progressive Rock Duo formed by Lebanese-American brothers Mathew & Christopher Aboujaoude. Their sound is a melange of both classic and contemporary progressive rock, fused with expansive orchestration and cinematic elements. Born and raised in Lebanon, the duo began their musical journeys at young ages, 7 & 9, respectively and have been playing together ever since. Their careers took a professional turn when they formed Pink Floyd tribute ‘Brick Floyd’ with their father. They toured from 2014-2017 in the Middle East and in the USA, the 3 hour show completely synced to a psychedelic laser-lightshow. Their debut album “Ashes of a Diary” was released worldwide on September 14th, 2019. See for more.

Ashes of a Diary