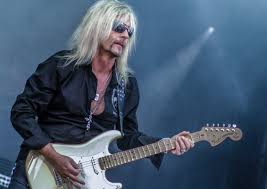 Axel Rudi Pell (born 27 June 1960) is a German guitar player, playing melodic heavy metal. He started off with the band Steeler (1984–88) before leaving to start his solo career in 1989 with his eponymous band (Axel Rudi Pell). During this time, he has played with such drummers as Jörg Michael and Mike Terrana, and singers Jeff Scott Soto and Rob Rock. See for more.

The Temple Of The King

Tearin’ out my Heart

In the air tonight

Strong As A Rock