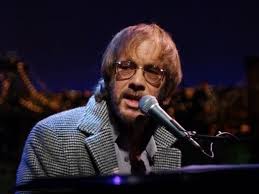 Warren William Zevon (/ˈziːvɒn/; January 24, 1947 – September 7, 2003) was an American rock singer-songwriter and musician. Zevon’s compositions include “Werewolves of London”, “Lawyers, Guns and Money”, “Roland the Headless Thompson Gunner” and “Johnny Strikes Up the Band”, all of which are featured on his third album, Excitable Boy (1978). He also wrote major hits that were recorded by other artists, including “Poor Poor Pitiful Me”, “Accidentally Like a Martyr”, “Mohammed’s Radio”, “Carmelita”, and “Hasten Down the Wind”. Along with his own compositions, Zevon recorded or performed occasional covers, including Allen Toussaint’s “A Certain Girl”, Bob Dylan’s “Knockin’ on Heaven’s Door” and Leonard Cohen’s “First We Take Manhattan”.  See for more.

My shit’s fucked up

Keep Me In Your Heart

Desperados Under The Eaves

Back in the High Life Again