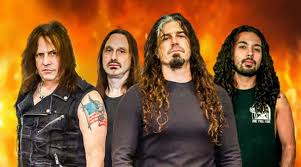 Manowar is an American heavy metal band from Auburn, New York. Formed in 1980, the group is known for its lyrics based on fantasy (particularly sword and sorcery), mythological topics (particularly Norse mythology) and for playing a lot of songs about heavy metal music, along with their “loud and bombastic” sound. In an interview for MTV in February 2007, bassist Joey DeMaio lamented that “these days, there’s a real lack of big, epic metal that is drenched with crushing guitars and choirs and orchestras… so it’s nice to be one of the few bands that’s actually doing that.”  See for more.

Warriors of the World

The Blood of Odin

Hymn Of The Immortal Warriors

Back to the frontPage.