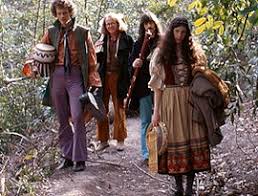 Espers is an American psychedelic folk band from Philadelphia, United States, that is part of the emerging indie folk scene. They formed in 2002 as a trio of singer-songwriter Greg Weeks, Meg Baird and Brooke Sietinsons but later expanded to a sextet including Otto Hauser, Helena Espvall and Chris Smith. Their music is reminiscent of late-sixties British folk as well as many contemporary folk acts. Most of the band’s members have also featured on recordings by a number of other folk artists such as Nick Castro and Vashti Bunyan and as a result have become an important part of the psychedelic folk revival. See for more.

Black is the color