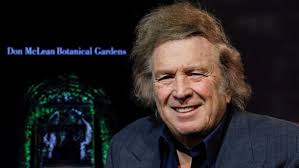 Donald “Don” McLean (born October 2, 1945) is an American singer-songwriter. He is most famous for the 1971 album American Pie, containing the songs “American Pie” and “Vincent”. McLean’s grandfather and father were also named Donald McLean. The Buccis, the family of McLean’s mother, Elizabeth, came from Abruzzo in central Italy. They left Italy and settled in Port Chester, New York, at the end of the 19th century. He has other extended family in Los Angeles and Boston. See for more.

And I Love You So

SINCE I DON’T HAVE YOU

Oh My What A Shame