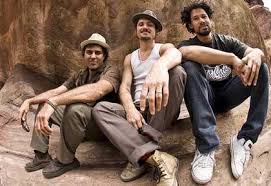 The John Butler Trio are an Australian roots and jam band led by guitarist and vocalist John Butler, an APRA and ARIA-award winning musician. They formed in Fremantle in 1998 with Jason McGann on drums and Gavin Shoesmith on bass. By 2009, the trio were Butler with Nicky Bomba on drums and percussion and Byron Luiters on bass. The band’s second studio album, Three (2001) reached the top 30 in the Australian album charts and achieved platinum sales. See for more.

Home is where the heart is

Message in a bottle

Fire in the sky

Back to the frontpage.