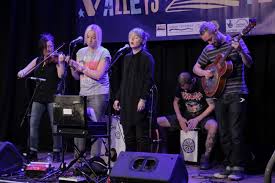 Stick in the Wheel are a band with its origins in working-class East London, UK. It consists of vocalist and artist Nicola Kearey and Ian Carter, their producer, arranger and Dobro player. They bring a contemporary approach to folk music with raw minimalism, setting vocals to simple accompaniments and handclaps, along with progressive synths and beats informed by the street music of their heritage. They sing and perform both their own compositions and traditional songs, which hold a strong relationship to each other through their subject matter. See for more.

A Tree Must Stand In The Earth