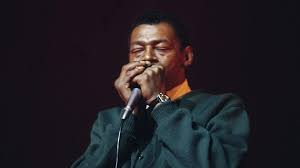 Little Walter, born Marion Walter Jacobs (May 1, 1930 – February 15, 1968), was an American blues harmonica player, whose revolutionary approach to his instrument has earned him comparisons to Charlie Parker and Jimi Hendrix  for innovation and impact on succeeding generations. His virtuosity and musical innovations fundamentally altered many listeners’ expectations of what was possible on blues harmonica. Little Walter was inducted to the The Rock and Roll Hall of Fame in 2008 in the “sideman” category making him the first and only artist ever to be inducted specifically for his work as a harmonica player. See for more.

Key To The Highway

blues with a feeling