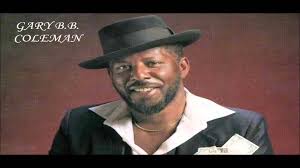 Gary B.B. Coleman (January 1, 1947 – February 14, 1994) was an American soul blues guitarist, singer, songwriter and record producer. Originally a local musician  turned blues promoter and session musician, Coleman recorded his debut album in 1986, which was re-released by Ichiban Records. He issued several other albums and produced most of Ichiban’s blues catalogue until his death, in 1994. On many occasions, Coleman undertook multi-instrumentalist duties in the recording studio. He acknowledged both B.B. King, with his “B.B.” moniker, and a fellow Texan, Freddie King. See for more.

Dealin’ From The Bottom Of The Deck

The Sky is Crying

As The Years Go Passing By

I Fell In Love On A One-Night Stand

Dealin’ From The Bottom Of The Deck