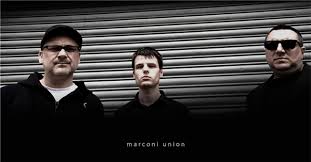 Marconi Union are an English musical trio consisting of Richard Talbot, Jamie Crossley and Duncan Meadows. Marconi Union are a UK band formed when Talbot and Crossley met while working in a Manchester record shop. They have a reputation for being somewhat elusive as they frequently refuse interview requests and show little interest in promoting themselves despite having attracted considerable critical acclaim. Their self-produced debut album, Under Wires and Searchlights, appeared in 2003 on the English independent label Ochre Records. See for more.