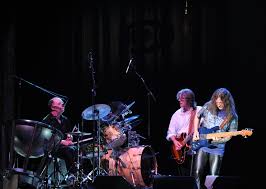 Nektar (German for Nectar) is an English progressive rock band originally based in Germany. The band formed in Hamburg, Germany in 1969. The founding members were Englishmen Roye Albrighton on guitars and lead vocals, Allan “Taff” Freeman on keyboards, Derek “Mo” Moore on bass, Ron Howden on drums and artists Mick Brockett and Keith Walters on lights and “special effects”. Though the concept of non-performing bandmembers was not unprecedented (i.e. lyricist Keith Reid in Procol Harum), it was considered unusual that a third of Nektar’s lineup had no role in performing or writing their music. See for more.

For the Love of Money

Do You Believe In Magic

Man In The Moon

A Tab in the Ocean

Show Me The Way

It’s All in the Mind