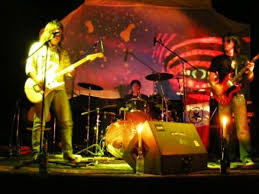 Space Debris is a band from southern Germany that produces instrumental music in the tradition of herb , psychedelic and hard rock from the early 1970s. The band combines stylistic devices from Krautrock ( Can , Birth Control , Amon Düül etc.) and early British psychedelic rock ( Pink Floyd , Deep Purple , Brian Auger , Jimi Hendrix etc.) to create their own homogeneous music. For this reason, Space Debris was described by the music press (Moonhead magazine March / 2005) as the missing link between these two poles of music history. The band uses the concept of spontaneous compositions, which the Krautband Can has largely promotedby creating a compositional framework that is melodious and rhythmic from free play without agreement. See for more.