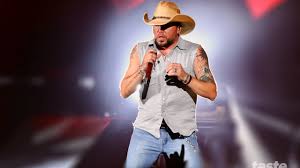 Jason Aldean (born Jason Aldine Williams; February 28, 1977) is an American pop country singer. Since 2005, Aldean has recorded for Broken Bow Records, an independent record label for which he has released five albums and sixteen singles. His 2010 album My Kinda Party is certified triple platinum by the Recording Industry Association of America (RIAA), while his 2005 self-titled debut, 2007 album Relentless and 2009 album Wide Open are all certified platinum. Of his singles, nine have reached the number one position on the Hot Country Songs charts: “Why”, “She’s Country”, “Big Green Tractor”, “The Truth”, “Don’t You Wanna Stay” (a duet with Kelly Clarkson), “Dirt Road Anthem”, “Fly Over States”, “Take a Little Ride”, and “The Only Way I Know”. See for more.

Tattoos On This Town

Dont Give Up On Me

Do You Wish It Was Me

My Memory Ain’t What It Used To Be

This i gotta see

Laughed Until We Cried