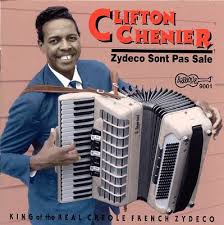 Clifton Chenier (June 25, 1925 – December 12, 1987), a Louisiana French-speaking native of Opelousas, Louisiana, was an eminent performer and recording artist of Zydeco, which arose from Cajun and Creole music, with R&B, jazz, and blues influences. He played the accordion and won a Grammy Award in 1983. In 1984 he was honored as a National Heritage Fellow. He was inducted posthumously into the Blues Hall of Fame in 1989, and the Louisiana Music Hall of Fame in 2011. In 2014, he was a Grammy recipient of the Lifetime Achievement Award. He was known as the ‘King of Zydeco’, and also billed as the ‘King of the South’. See for more.

I Am Coming Home

I’m A Hog For You Baby