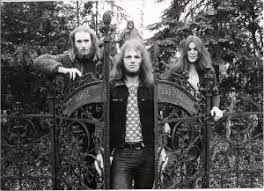 Popol Vuh were a German musical collective founded by keyboardist Florian Fricke in 1969 together with Holger Trülzsch (percussion), Frank Fiedler (recording engineer) and Bettina Fricke (tablas and production). Other important members during the next two decades included Djong Yun, Renate Knaup, Conny Veit, Daniel Fichelscher, Klaus Wiese and Robert Eliscu. The band took its name from the Mayan manuscript containing the mythology of the Quiché people of highland Guatemala; the name has been translated roughly as “meeting place” or “book of the community”. See for more.

They Danced, They Laughed, As of Old

They Danced, They Laughed, As of Old

Song of the high mountains