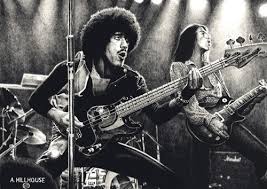 Thin Lizzy are an Irish rock band formed in Dublin in 1969. Two of the founding members, drummer Brian Downey and bass guitarist/vocalist Phil Lynott, met while still in school. Lynott assumed the role of frontman and led them throughout their recording career of twelve studio albums. Thin Lizzy are best known for their songs “Whiskey in theJar”, “Jailbreak” and “The Boys Are Back in Town”, all major international hits still played regularly on hard rock and classic rock radio stations. See for more.

Whiskey in the jar

The Boys Are Back In Town

Dancing In The Moonlight

Still in Love With You

The Sun Goes Down

Killer On The Loose