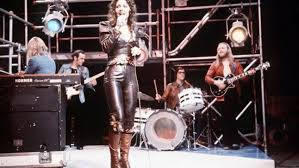 Earth & Fire was a Dutch pop group from the seventies. The Voorschotense-Voorburg-Leidschendam group had as figureheads Jerney Kaagman (vocals) and the twin brothers Gerard (keyboards) and Chris Koerts (guitar). The other band members changed over time. Drummer on the first two hits was Cees Kalis, who then opted for a job in education. He died in 2006. The band was founded in 1967 as Opus Gainfull, by the brothers Koerts, Hans Ziech and Cees Kalis. When singer Manuela Berloth joined the band, the name was changed to Earth & Fire. Berloth, who had already had a solo career under the name Lysett, had to drop out due to an eye disease, and her place was taken by Jerney Kaagman who had been a singer of The Rangers until then. See for more.

Ruby is the One

Song of the Marching Children

Thanks For The Love